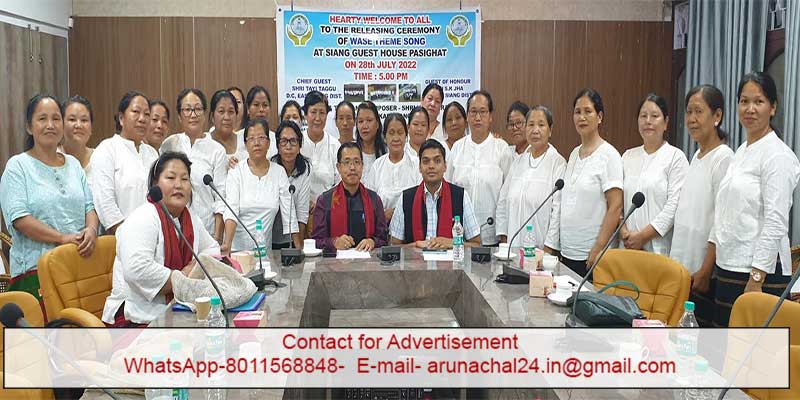 PASIGHAT- (By Maksam Tayeng) – In a small ceremony held tonight at Siang Guest House, Tayi Taggu, Dy. curator, Pasighat released a theme song from Women Against Social Evils (WASE) in the presence of Sumit Kr. Jha, Supt. of Police, Pasighat and lyricist-cum-tune-cum-composer of the song, Nalo Jerang and singer of the song, Kasu Langkam in addition to other members of WASE.

During the release of the WASE theme song, the two guests, Tayi Taggu and Sumit Kr. Jha deeply acknowledged and appreciated the work of the WASE team in their efforts to eradicate the menace of drugs in the district. From Supt. of the police, Jha said that the name and fame of WASE has now crossed the border of Arunachal Pradesh and the whole country is gradually coming to know the true works and sacrifices of the WASE mothers.

“As some of the WASE team members have personally experienced the harms of drug addiction on their own children, they have actively contributed to eradicating the threat of drugs without any expectation from anyone,” Jha said. Although Taggu has stated this, the work of the WASE mothers has directly and indirectly aided the district administration and police in their attempt to keep the district safe from the growing threat of drugs.

On behalf of the WASE team, the President, Yamik Dulom Darang and the General Secretary, Joya Tasung Moyong expressed their sincere gratitude to Nalo Jerang, Kasu Langkam for coming up with a theme song for WASE and the duo also expressed their gratitude to the district administration and police, including the media to focus the work of WASE from the beginning.

The song’s lyricist-cum-tune-cum-composer, Nalo Jerang and singer of the song, Kasu Langkam also spoke on the occasion and shared their goal of contributing to the theme song. The same theme song, according to Nalo Jerang, will be featured with a performance on Independence Day on the 15the next August to raise awareness of the threat of drugs through song.

The WASE team has been involved for several years in the fight against drugs and other illicit substances. Their good works have already inspired many other organizations in the state today, including organizations in neighboring Assam.

The ceramic fiber market is expected to grow at a CAGR of 11.35%