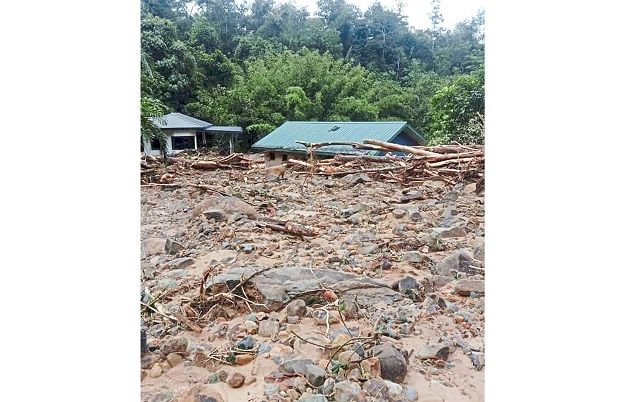 Floods leave a trail of destruction

KOTA KINABALU: Floods and landslides that hit Papar, Penampang, Putatan and Kota Kinabalu on Wednesday left a trail of mud, overturned cars and collapsed houses among the damage.

A landslide nearly damaged houses in its path.

In Penampang, three people – a 25-year-old woman, a five-year-old girl and an eight-month-old baby – were killed in the Forest Hill landslide.

A family of six managed to escape their home when they heard a loud gushing noise; they are now taking refuge in a nearby relative’s house.

“Our whole house was hit by the landslide, everything is destroyed,” said one of the residents who did not wish to be identified.

A flood victim who only wanted to be known as Elizabeth said she didn’t expect the floodwaters to increase within an hour or two.

â€œThe water spurted out and we didn’t have time to collect our things like the refrigerator, children’s textbooks, mattresses and more,â€ said Inobong’s mother of four.

Angel Albert, 19, of Kg Togop, said it was scary to see how the water level in the river continues to rise as the rain stopped.

â€œThis is the worst flood I have ever seen. The water level was almost waist deep, damaging our washing machine, refrigerator, beds and tables, â€she said.

Residents of Luyang, Bundusan and surrounding areas were also puzzled as to what could have caused such an extreme flood, even affecting areas that were generally unaffected.

A cashier who has lived in Bundusan for more than 20 years said she has never seen flood waters rise on main roads in her area.

“It just doesn’t make sense, the rains weren’t any heavier than we have experienced, but the flood waters were coming in so fast,” said the mother of one.

In Kasigui, Alex Tham said his car, motorcycle and everything in the house “pretty much went to the mechanics for repair”.

â€œWe’ve always had flash floods, but I’m shocked, sad and stressed this time around because it all happened in two hours,â€ he said, adding that many people, including his colleagues, were stranded and had to spend the night at their desks.

“I was also out in the afternoon before the storm and when I wanted to go home, the road to my house was already flooded, so I had to wait until sunset for my neighbor to come and pick me up. with his pump boat. “

A car landed on its roof after being swept away by strong currents.

Tham said the situation has gone on for so long that people living on dry land have had to resort to buying boats to cope with the relentless recurrent flooding.

Meanwhile, hundreds of households affected by the incident are also struggling to clean up debris following water shortage issues due to clogged and damaged pipes.

Others are still waiting for the floodwaters to calm down.

According to state civil defense officials, the total number of people evacuated at 8 a.m. was 68 people from 27 households in Penampang and Putatan.