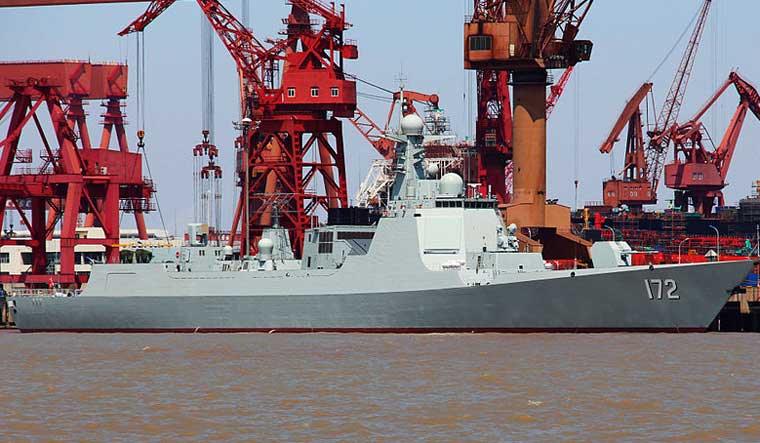 In 1989, the European Union imposed an arms embargo on China following the Tiananmen Square massacre.

While the EU arms ban remains in place, the Chinese military has been able to obtain equipment from European countries.

On Saturday, two German media—public broadcaster ARD and the Welt am Sonntag newspaper – published the results of an investigation that several types of Chinese warships used engines of German origin.

The engines were supplied by MTU and the French subsidiary of Volkswagen subsidiary MAN. Both companies are renowned suppliers of marine diesel engines. The investigation relied on publicly available information from the Stockholm International Peace Research Institute (SIPRI), which reports arms transfers around the world.

What kind of ships?

germany Deutsche Welle reported, “MTU was a regular supplier of engines for Luyang III-class missile destroyers through a licensed production facility in China until at least 2020.” The Luyang III is the NATO designation for a class of warships that the People’s Liberation Army Navy (PLAN) calls the Type 052D. Deutsche Welle reported that MTU had also supplied engines used in the “Song” class of diesel-electric submarines.

“…in 2002, SEMT Pielstick, the French subsidiary of MAN, published on the company’s website the news of its delivery of PA6 engines manufactured for a new generation of frigates under license in China.” Deutsche Welle reported.

MTU informed ARD and Welt am Sonntag that it had “definitely stopped” supplying engines for submarines and had no contracts with the Chinese military.

The MTU engines used on Chinese warships belonged to the category of dual-use technologies, which meant that they could be used for both civilian and defense purposes.

Alexander Lurz, a Greenpeace weapons expert, said Welt am Sonntag that the German technology export regime was export-oriented. Lurz argued that the new government should ban “the export of anything used to produce weapons and wage wars”.

Sebastian Rossner, a lawyer, was quoted by Deutsche Welle saying, “Because the EU arms embargo on China has not been formally decided in accordance with European treaties, some ship engine exports may also be permitted for the Chinese navy. If you want to change that, the EU must either amend the Dual-Use Regulation or formally impose an arms embargo.”

Over the years, various EU members, such as France and Spain and even Germany, have argued that the arms embargo should be lifted. They cited the extent of trade with China and the benefits for domestic arms manufacturers, who face fierce competition from US arms manufacturers.

How important are these ships?

The Type 052D destroyer displaces around 7,500 tons and has advanced radar and a command and control system, which observers have dubbed the Chinese equivalent of the US Aegis combat management system. The Type 05D is equipped with long-range surface-to-air missiles, cruise missiles to destroy ships and land targets, and torpedoes to attack submarines.

The most recent US Congressional Research Service (CRS) report, released in October, estimates that China has built at least 25 Type 052D ships.

Song-class submarines are equipped with anti-ship missiles and torpedoes to attack surface ships and submarines.

In 2006, a Song-class submarine surfaced about 15 km near the USS Kittyhawk, a US aircraft carrier that was conducting exercises in the East China Sea between Japan and Taiwan. The incident caused a stir amid claims that US Navy ships escorting the carrier were unable to detect the submarine.

Why news is important

The revelations come as China has built the largest navy in the world, in terms of ships and manpower. According to the Pentagon’s recent report on China’s military modernization, the People’s Liberation Army Navy has 355 ships, including “major surface combatants, submarines, aircraft carriers, ocean-going amphibious ships, mine warfare vessels and auxiliary fleets”. PLAN could grow to 460 ships by 2030.