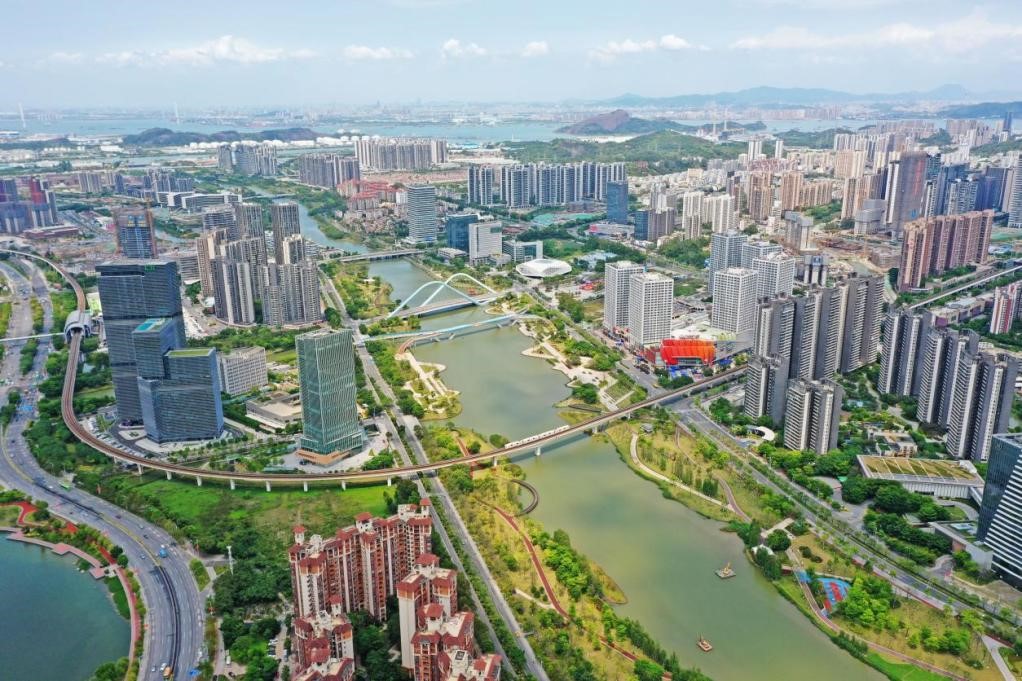 Significant gradual progress has been made in the Guangdong-Hong Kong-Macao Greater Bay Area five years after construction of the megalopolis began.

A number of policies have been rolled out and a series of infrastructure projects implemented in the Greater Bay Area, which have greatly enhanced the overall strength of the region and greatly brought closer the cooperation between Guangdong, Hong Kong and Macau, providing a greater sense of accomplishment for the people who live there.

A “one-hour circle of life” is built in the Greater Bay Area through the accelerated development of the railway.

The total operating mileage of railways in the Greater Bay Area reaches nearly 2,500 kilometers, including 1,430 kilometers of high-speed tracks, and another 975 kilometers are currently under construction.

The total rail transport operating mileage in the nine cities has reached 1,092 kilometers, and another 662 kilometers are under construction.

By the end of 2021, the operational mileage of highways in the Greater Bay Area had reached 4,972 kilometers, providing a road network density of 9.1 kilometers per hundred square kilometers, which ranks among the highest of the major groups. of cities, both at home and abroad.

In the Greater Bay Area, world-class airports and port clusters are taking shape. The region’s airports have a total passenger handling capacity of 200 million people and the ports are capable of handling over 80 million twenty-foot equivalent units.

At present, the four ports of Guangzhou, Shenzhen, Zhuhai and Dongguan have seen their cargo throughput exceed 100 million tons. Shenzhen Port and Guangzhou Port rank fourth and fifth globally in terms of total volume of goods unloaded and loaded.

The rules and mechanisms of Guangdong, Hong Kong and Macao are increasingly connected, accelerating the establishment of a new open economy system.

Guangdong further shortened its negative lists for investment from Hong Kong and Macao, liberalizing trade in services with the two special administrative regions (SARs). At present, companies from the two SARs enjoy national treatment when investing in the legal, accounting and construction sectors in Guangdong. The southern province of China has also opened online business registration services for investors from Hong Kong and Macau, allowing investors to set up a business within one business day.

In addition, the Guangdong-Macao Deep Cooperation Zone in Hengqin has launched cross-border business registration services, through which companies in Macao can establish offices in the cooperation zone without even visiting it.

With the establishment of the Shenzhen-Hong Kong Stock Connect, the Southbound Scheme and the Cross-boundary Wealth Management Connect Scheme, the RMB has become the largest cross-border settlement currency in the Greater Bay Area.

The number of bank accounts opened on the mainland by residents of Hong Kong and Macao has reached 180,000, and residents of the Greater Bay Area are enjoying more convenient cross-border financial services.

At present, the Pearl River Delta is becoming an ideal destination for people from Hong Kong and Macao as it provides a healthy business, working and living environment. It establishes a closer connection between the people of Guangdong and the two SARs.

Guangdong has already granted citizen treatment in the area of ​​livelihood to residents of Hong Kong and Macao. By the end of 2021, 279,200 residents of the two SARs had registered for staffing, unemployment and work injury insurance in Guangdong.

The Macao New Neighborhood Project implemented in the Guangdong-Macao Deep Cooperation Zone in Hengqin is able to provide 4,000 apartments for Macao residents. The cooperation zone had 503 registered Macau employees at the end of last year, up 114 percent year on year.

The increasingly frequent job exchanges between Guangdong and the two SARs are fueling the flow of innovation factors. At present, more than 85,100 Hong Kong and Macao residents have registered for employment in Guangdong. More than 1,000 residents of Hong Kong and Macao have registered for recruitment examinations held by mainland public institutions in the Greater Bay Area, and the first batch of those admitted have reported for work.