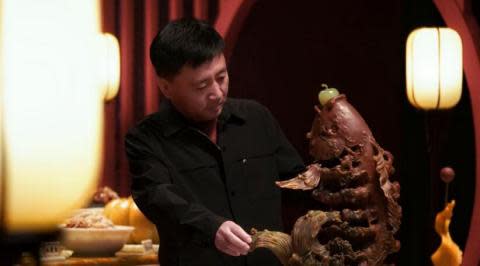 Hongshan artisans devote their efforts to jade carving, helping to lay the groundwork for a global cultural renaissance

On September 21, a large jade carving exhibition opened in Xiuyan, China, where artisans from Hongshan dedicated ten years of their lives to the work “Life Salute”, which was displayed on the screen. from NASDAQ on 29 New York Time, and the millennial Hongshan culture swept the world stage with magnificent momentum and a long legacy of breathtaking Chinese civilization.

As a planner, Zhai Peng, a craftsman from Hongshan, enlisted a team of more than one hundred Hongshan craftsmen to participate in the whole process of planning, selecting, creating and then exhibiting. , stating, “We have completed this work to contribute to the prosperity of our culture, to strengthen the cultural confidence of the nation and, ultimately, for the great rejuvenation of the Chinese nation.”

In the future, Zhai Peng and his team will continue to create works of art, found cultural exhibitions and world cultural and artistic fairs, laying the foundation for the great revival of Chinese culture, allowing Chinese culture to show. its permanent charm and contemporary style, and continuously forge new glories of Chinese culture.