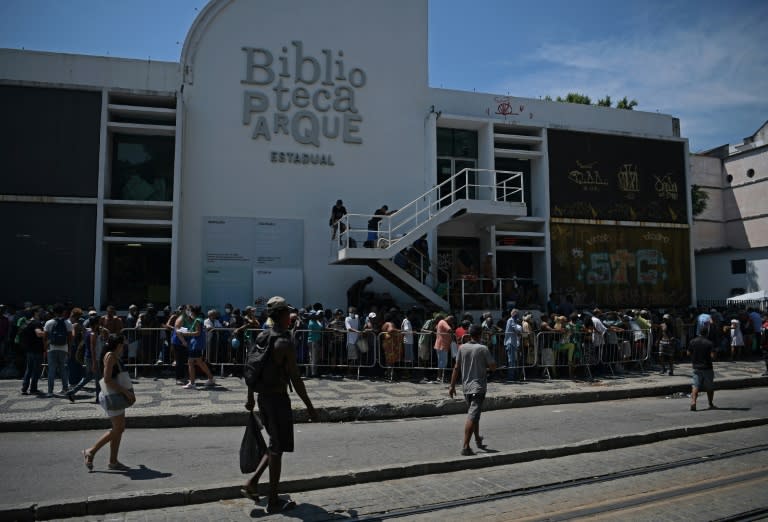 In food-rich Brazil, people go hungry as pandemic rages on


Lines of homeless people and other people in need waiting for free meals on the streets of Brazil grow longer as the Covid-19 pandemic spirals out of control.

In downtown Sao Paulo, Miguel da Silva seizes a sealed package containing rice, vegetables and meat or fish after queuing with some 300 other people, most of them beggars.

“Better to come here than ask for money,” said da Silva, 70, who says his pension has been suspended by the government and is spending what little he earns on his rent.

Under the scorching sun of Rio de Janeiro, a man named Mario Lima also waits for a food distribution, along with hundreds of elderly people, pregnant women and the homeless. For many, it is their only meal of the day.

“Everything is expensive. If I bought the food they distribute here, it would cost over 1,000 reals ($ 170) a month,” said Lima, who is 72 years old. His retirement pension is sufficient for his rent, some basic expenses and nothing else.

Da Silva and Lima provide just two snapshots of how Brazil is becoming impoverished during the Covid-19 pandemic.

The global health crisis has left more than 315,000 people dead in the country and millions of unemployed, and plunged many people into poverty and hunger, who did not know such pain before.

– “Things are getting worse” –

The pandemic is accentuating a trend seen over the past six years in Latin America’s largest economy, which is one of the world’s major food suppliers.

In mid-2020, the director of the World Food Program’s Brazil office, Daniel Balaban, warned that Brazil was quickly heading back to the world hunger map, which he left in 2014. countries appear on this list when more than 5% of their population lives in extreme poverty.

The World Bank then said an additional 5.4 million Brazilians would fall into this category in 2020, for a total of 14.7 million. The total population is 212 million people.

“This is clearly the scariest moment we have experienced in the fight against hunger,” said Rodrigo Afonso, director of an NGO called Accion Ciudadana.

Afonso said that when the organization was founded in 1993 to fight hunger, the problem was concentrated in the sprawling north and northeast of the country.

“Today, wherever you go, you will find a large number of families who cannot feed themselves,” Afonso said, and “things are getting worse”.

A survey carried out in November by the Getulio Vargas Foundation found that nearly a third of those surveyed were food insecure.

The government of right-wing President Jair Bolsonaro, which downplayed the importance of the pandemic, began paying a third of the population around 600 reals per month from April of last year. Aid was reduced to 300 reals in October and ended in January.

That money has been a big help, but the people most in need in Brazil have now been without it for three months in an economy with the highest unemployment rate in almost a decade – 13.5% at the end of 2020 – steadily rising prices and the most devastating chapter in the pandemic yet.

“Before the pandemic we had things. Now we have nothing,” said Silvana da Silva, 22, who managed by recycling waste from restaurants and shops. Now they’re closed because of Covid-19, and she gets her food through Sao Paulo City Hall.

Due to the rise in the ranks of the new poor, city officials are now distributing 10,000 free meals a day, an increase of one-third.

In Rio also, “the question of food is of extreme urgency”, declared Bruno Dauaire, secretary for social development and human rights of the State of Rio.

“It wasn’t that long ago that we didn’t even talk about poverty and hunger in the city of Rio, and now we are facing this problem,” Dauaire said.

NGOs are trying to compensate governments struggling financially and overwhelmed by the pandemic, but they are faced with much smaller donations.

The Sao Paulo Red Cross, which distributes 2,000 food baskets a day, says the cash donations it receives are down 99%.

“People need more help and for longer periods,” said Bruno Semino, head of this branch of the Red Cross.

The lack of donations, he said, “has a major impact on our operations.”

“We operate where the government is absent,” said Afonso d’Accion Ciudadana. “Unfortunately, in recent years the government has been absent from many places.”