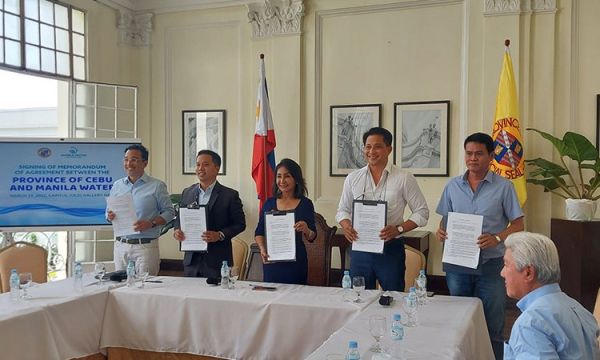 ENDING a more than two-year dispute, the Cebu provincial government has signed a settlement agreement with Manila Water Consortium Inc. (MWCI) regarding the latter’s alleged breach of their Joint Investment Agreement (JIA) over the construction and expansion of aqueducts in the province.

Under the agreement, which settles the dispute without admitting any fault or liability to either party, MWCI would pay P22,050,000 in funding for its corporate social responsibility projects in Cebu province.

Under the agreement, which supersedes and supersedes all prior agreements and commitments between the two parties, MWCI will be permitted to continue to supply bulk water to the Cebu metropolitan area by extracting water from the Luyang River. in the town of Carmen, northeast of Cebu.

On March 21, 2012, the Cebu Provincial Government and MWCI had entered into a JIA to form a joint investment company called Cebu Manila Water Development Inc. (CMWD) to engage in the construction, rehabilitation, removal, the repair, improvement and expansion of aqueducts and treatment facilities.

Under the revised agreement signed on Tuesday to formally reflect current operational realities, there would be an increase in the tariff rate from 13.95 pesos to 24.59 pesos per cubic meter and an increase in capital expenditure to 1,330,742,259. .91 pesos.

The Province would seek to return to its original 49% ownership interest in CMWD through the declaration and payment by CMWD of cash dividends on the Common Shares based on the parties’ original economic interest, which the Province would use to underwrite to non-preferred shares with voting rights.

The two parties agreed to increase the authorized share capital of CMWD by 144,117,600 pesos consisting of 1,441,176 non-voting redeemable preferred shares, to which the province would subscribe.

However, the Province’s ownership in CMWD was diluted to 29.4% when it declined to subscribe for non-voting preferred shares issued by CMWD in 2015.

Other violations included allegations of increasing capital expenditure from 702 million pesos to 1,003,000,000 pesos and decreasing the project’s internal rate of return from 19.23% to 12.30%.

These alleged serious and material violations were apparently not approved and authorized by the parties to the JIA.

After finding MWCI’s explanation unsatisfactory, the Province served a Notice of Termination on the JIA on December 10, 2019, to which the Consortium responded by serving a Notice of Dispute on the Province, preparatory to arbitration. .

On February 3, 2020, the parties signed terms of reference serving as an interim protocol pending resolution of their dispute.

Can you stop wage garnishment with debt consolidation?