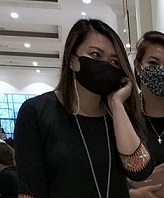 Witness says he was pressured to disclose source of money

KOTA KINABALU (April 13): The Sessions Court heard on Wednesday that a friend of Ag Mohd Tahir Mohd Talib was to say that the RM14,000 money found in a condominium six years ago was allegedly from the former director of the State Water Department because she was under pressure, anxious and scared at the time.

Christine Fiona M Ponsoi, 36, who was testifying before Judge Abu Bakar Manat, recalled that she was under pressure and had to say so when the Malaysian Anti-Corruption Commission (MACC) repeatedly asked her questions .

Cross-examined by lawyer Marcel Jude Joseph, who represented Ag Mohd Tahir and Fauziah, the ninth witness said that the 14,000 RM which was in 140 100 RM notes was found in a purple colored plastic bag kept in a black backpack in the condominium. .

The witness added that the MACC took the money out of the backpack and counted it with his hands without using gloves.

On question, the witness said that she also had savings other than the RM14,000.

On another question, the witness further stated that she was not sure how many MACC staff came to the condominium, but maybe two or three or more and all the officers are male except one named Shazwani.

“I only remember it was lunchtime and after lunch I went to my parents and was surprised there were MACC staff waiting for me.

“They took my CI and when I was about to go to my office I was told not to go anywhere until Shazwani arrived. When Shazwani came, they took me to the condo,” the witness explained.

Lawyer: So you were brought into your condominium by MACC and it was against your will?

On another question, the witness said that she did not recall the amount spent on renovations to the condominium.

She said the renovation of the three-room condo included changing the flooring to parquet, installing cabinets, renovating the kitchen, wall cabinets and wallpaper.

Lawyer: Can you tell the court what your job duties are?

Witness: I’m a business development officer. I usually analyze business proposals.
Lawyer: That means you look at costs and budget?

Lawyer: But for some strange reason you appointed an interior designer but you are unable to give the court specific details of the renovation, that means your witness statement relating to renovation costs of 300,000 RM is exaggerated, yes or no?

Witness: I don’t remember, but that may be an exaggeration.

To another question, she replied that the condominium she had purchased was not in the name of Ag Mohd Tahir.

Under cross-examination by Deputy Prosecutor Mahadi Abdul Jumaat, the witness stated that she was allowed to go home by MACC at 10 p.m.

When asked by Mahadi, the witness also said that she was unsure of the exact cost of the renovation and that it was possible that it was around RM300,000.

However, on another question, she testified that the payment for the renovation was handled by her but the source of the money was allegedly from Ag Mohd Tahir.

Christine explained that her income did not qualify her for the home loan.

She further stated that the remaining balance of the loan, which was RM280,000, would have been paid by Ag Mohd Tahir.

On another question regarding rainy day money of RM14,000, she said the money was allegedly from Ag Mohd Tahir.

When asked to explain why she said she had to say the money allegedly came from Ag Mohd Tahir, she explained that during the raid she had no idea what had happened. past. She was not stable and even till today she is still not stable and she is also suffering from stress due to the incident.

Meanwhile, the 11th witness, a childhood friend of Ag Mohd Tahir, said the RM9.1 million found inside a car did not belong to him or his company.

Ampuan Hassim Ampuan Mahmot, 55, testified that on October 4, 2016, when the money was found, the car was in the custody of Ag Mohd Tahir.

The witness further stated that his other car, which he wanted to sell, was also allegedly bought by Ag Mohd Tahir for RM200,000.

The 10th witness, who is an assistant police officer from the Road Transport Department, Mr. Sanin Samian, 42, said that the two cars were registered under a company and that no information was provided in the columns of ownership of these cars because they were purchased with cash or car loans had been settled.

Ag Mohd Tahir faces 11 charges under Section 4(1)(b) of the Anti-Money Laundering, Terrorist Financing and Proceeds of Illegal Proceeds Act 2001 , while Fauziah and Lim were each charged with 19 and four counts of the same Act, respectively.

Lim allegedly committed the offenses at the Malaysian Anti-Corruption Commission (MACC) office in Jalan UMS and at a house in Jalan Penempatan here between October 13 and November 8, 2016.

A woman received RM280K for a condo | Daily Express Online